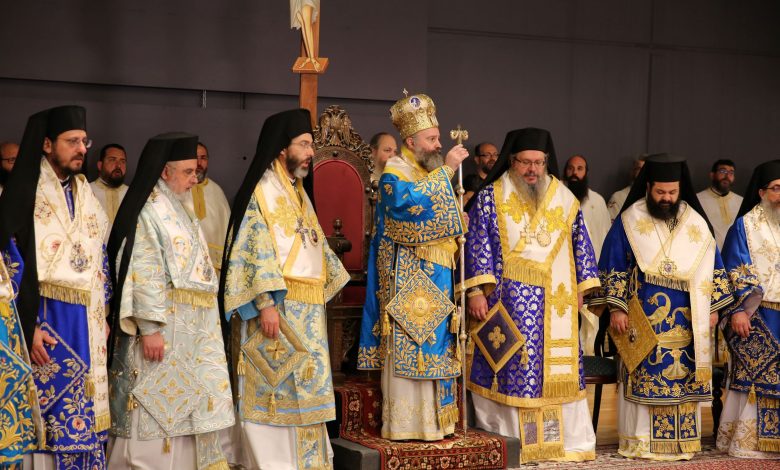 The first National Clergy Synaxis went down in history as a momentous event in the life of the Orthodox Church of the fifth continent given that, through the inspired theological lectures and the ensuing constructive dialogue, it brought spiritual benefit and renewal to the reverend clergy, monastics and all those participating in the proceedings. The overall successful organisation of the Synaxis concluded in a festive manner on Wednesday the 19th of October with the celebration of the peak liturgical event in the Orthodox Church, the Mystery of Mysteries.

Specifically, at the sports hall of the College of St Spyridon, Sydney, in a joyful and festive atmosphere, a Poly-Hierarchical Divine Liturgy was celebrated, presided over by His Eminence Archbishop Makarios of Australia and with concelebrants His Eminence Metropolitan Andrew of the Forty Churches, the distinguished representative of His All-Holiness Ecumenical Patriarch Bartholomew; His Eminence Metropolitan Ieronymos of Larissa and Tyrnavos; the Assistant Bishops of the Holy Archdiocese of Australia and the Clergy who serve in the Greek Orthodox parishes of the fifth continent.

The sacred chanting stands were graced with the presence of the members of the Byzantine Choir under the direction of the Director of the Sydney branch of the Australian School of Byzantine Music, Mr Basilios Psilacos.

Present among the large congregation were the Consul General of Greece in Sydney, Mr Yannis Mallikourtis; faculty staff and students of St Andrew’s Greek Orthodox Theological College; as well as many young people from the Greek Orthodox Colleges of St Spyridon, Kingsford; All Saints, Belmore; and St Euphemia, Bankstown.

At the conclusion of the Divine Liturgy, His Eminence Archbishop Makarios of Australia expressed his happiness at the successful completion and fulfillment of the aims of the National Clergy Synaxis, while declaring his gratitude to those who contributed towards this, making special reference to the assistance offered by the Parishes of the Resurrection of our Lord, Kogarah, and St Spyridon, Kingsford, as well as to the honorary presence of the Eminent Metropolitans of the Forty Churches and of Larissa and Tyrnavos. Addressing the two Hierarchs with fraternal and kind-hearted words, he thanked them for their excellent presentations at the Clergy Synaxis, as well as for the fact that they undertook a tiring journey to come to the Antipodes. Concurrently, he noted the great joy their presence brought to everyone, saying characteristically, “Because Australia is a distant place, when a fellow Hierarch comes from far away, we not only feel that we are hosting a brother, but we also experience Abraham’s joy when he hosted the Holy Trinity”.

After this, His Eminence Metropolitan Andrew of the Forty Churches expressed his gratitude to the Ecumenical Patriarch for the opportunity he was given to represent Him in distant Australia, a place so far away and yet so close, as he characteristically remarked, since, “we are united by our hearts, our common faith, and love in Christ.” Subsequently, he conveyed to the clergy and the people of the local Church, the blessings, love and paternal affection of His All-Holiness Bartholomew pointing out that, “our Patriarch and our Mother Church are proud of this great eparchy of the Ecumenical Throne, the Holy Archdiocese of Australia, because it is growing spiritually due to the labours and efforts of your Shepherd, Archbishop Makarios, the Assistant Bishops, and your priests”.

For his part, His Eminence Metropolitan Ieronymos of Larissa and Tyrnavos, during his short greeting, focussed on the value of united Hellenism, of which the Church has always been a guarantor. “When we lack unity, we are led to disasters”, he said emphatically, referring also to the tragic events for Hellenism with the Asia Minor Catastrophe. However, he expressed his pleasure for the unifying climate he discerned within the Orthodox Church and the Greek community during his presence in Australia as well as for the unifying spirit with which His Eminence Archbishop Makarios serves. “This unity, which you seem to consciously minister,” he said, addressing His Eminence, “we can boast that you have already achieved it and we can enjoy its fruit. Therefore, we consider your ministry in the Church of Australia to already be successful and distinguished. And that is why we have confidence that the local Church has many more joys to experience under your inspired ministry”.

Concluding his talk, His Eminence Metropolitan Ieronymos of Larissa and Tyrnavos, expressed his love, appreciation and respect for the Archbishop of Australia, while urging the faithful to behave similarly towards their Shepherd, stating that this will primarily benefit them. “In the person of the Archbishop, see your common father”, he urged, “and love him, appreciate him, respect him, so that he will support you with all his heart, as he already does and for the Church of Australia to continue its journey towards days of glory, with lasting successes and spiritual conquests”.

After the dismissal of the Divine Liturgy, Archbishop Makarios together with the invited Hierarchs, the Assistant Bishops, the clergy and the faithful who attended the church service, sat for a meal provided by the Parish of St Spyridon, Kingsford. 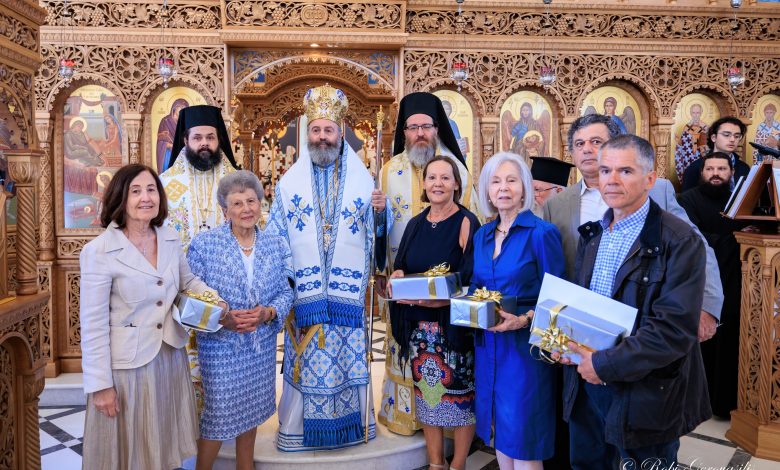 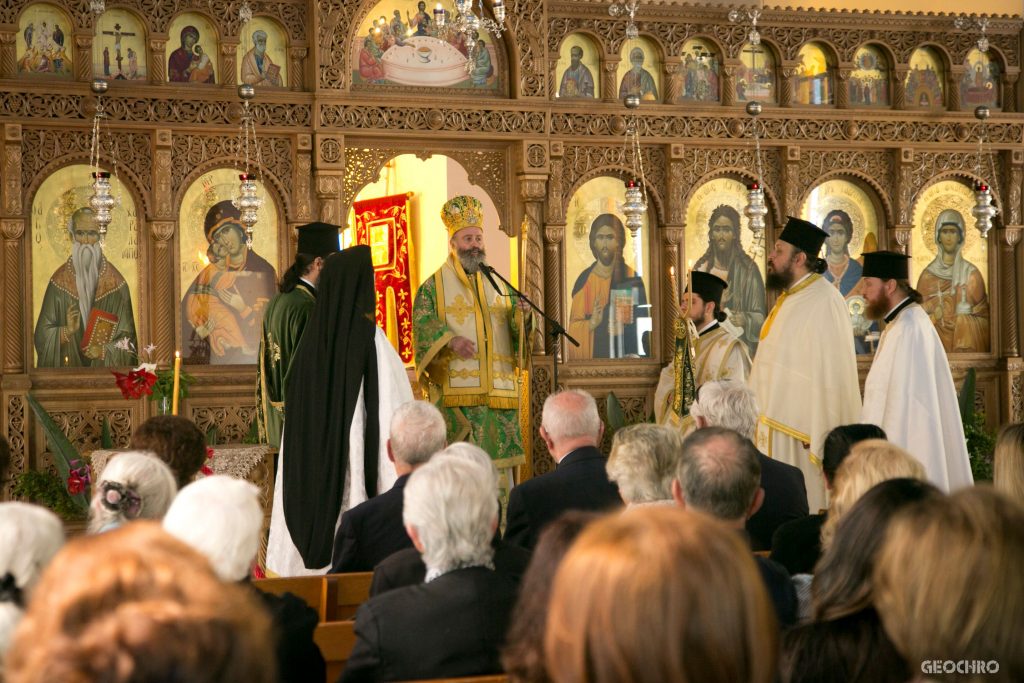 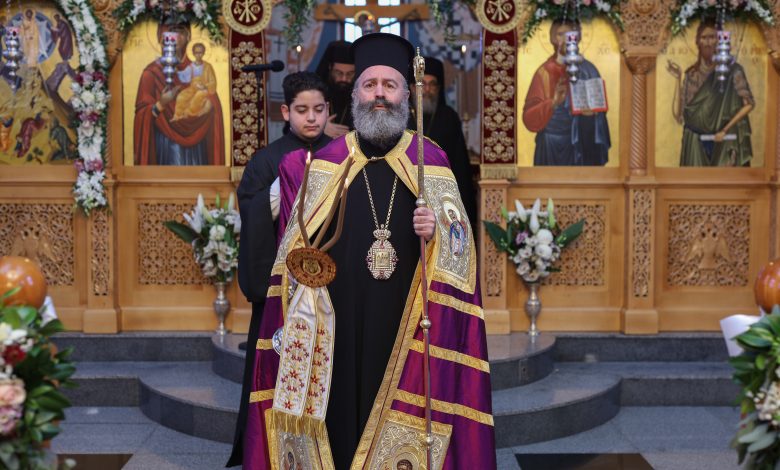