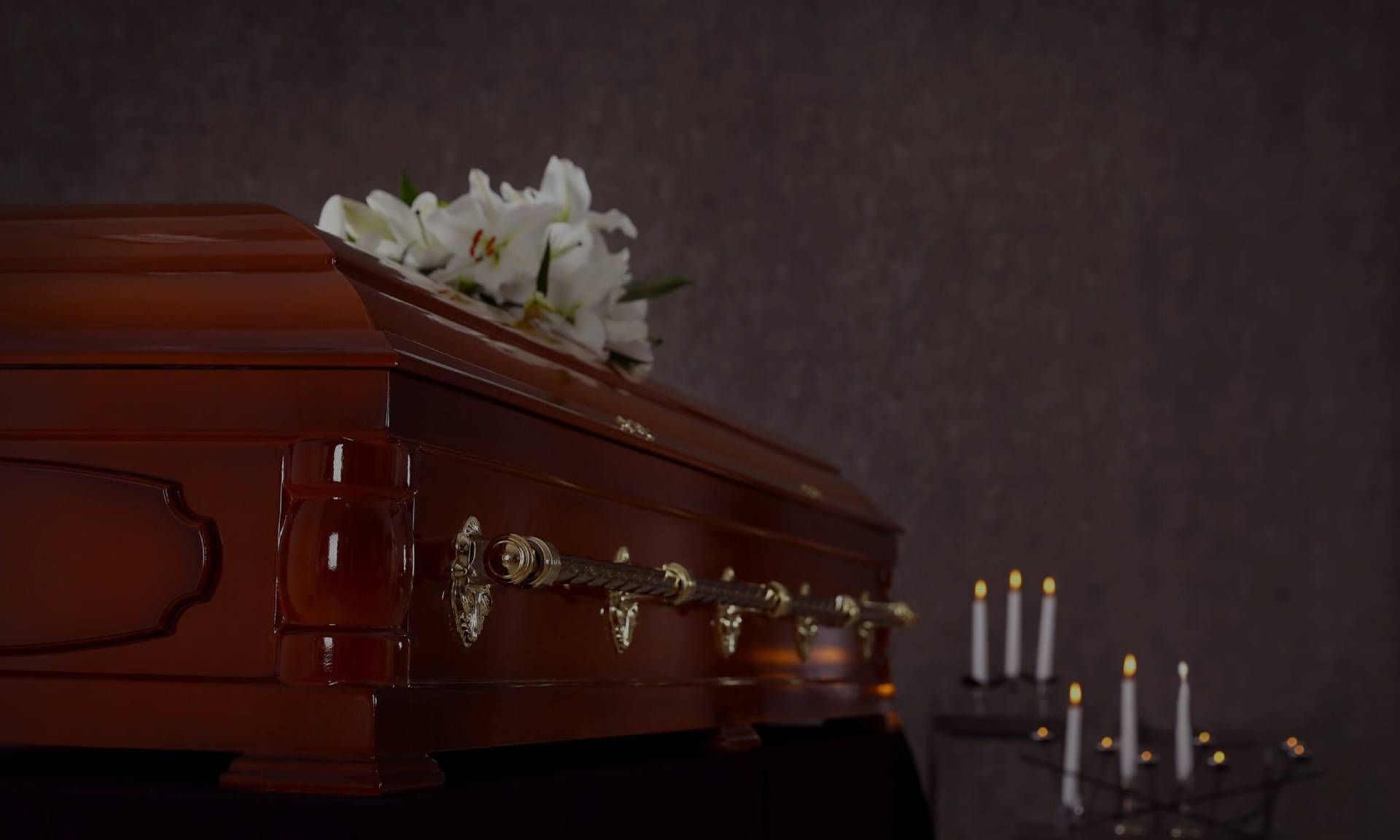 The “Trisagion Service” is a brief service that is chanted and performed by the priest for a person who has died. The service is often performed at the following times:

At the Memorial Service (Mnimosino), the family bring to the Church “Kollyva”- ie boiled wheat mixed with sweets such as sugar, sultanas etc. At a Trisagion the family may if they wish bring Kollyva to distribute to the people after the service. (The practice of throwing the plate of Kollyva into the grave and breaking it, is not a Christian practice or custom of the church and therefore it is discouraged).

The Apostolic Constitutions recommend Memorials on the third day after a person has passed away, representing Christ’s death and Ressurection on the third day. The ninth day “as a reminder of the living and the dead”, and “on the fortieth day according to ancient practice.” (The people of Israel mourned for the great Moses in this way.) St Symeon of Thessaloniki interprets these important days as: “The three day Memorial we do for the Holy Trinity, because from the Holy Trinity we have our existence and our life. The nine day Memorials remind us of the nine orders of holy Angels, among which our beloved one has been numbered. The fortieth day Memorial is for the Ascension of our Saviour. The three-month, six-month and nine-month symbolize the Holy Trinity”.

The “Kolyva” (boiled wheat) also have their symbolism in the church. The boiled wheat kernels express belief in everlasting life. Jesus said, “Unless a grain of wheat falls into the earth and dies, it remains alone, but if it dies, it bears much fruit” (John 12:24). Just as new life rises from the buried kernel of wheat, so the Church believes that the one buried will rise one day to a new life in God. The wheat is covered in sugar and sultanas to symbolise the bliss of eternal life in Heaven.

The Trisagion Service is as follows:

One may ask, why do we pray for those that have died? It is true that there can be no repentance after we die, a person’s eternal destiny is determined immediately after death, and we cannot really expect our prayers to snatch an unbeliever from a state of evil and misery to the state of sanctity and blessedness. Why then do we pray for the dead? It is because praying for the dead is an expression of love. We ask God to remember the departed because we love them. Love survives death and transcends it.

The Fathers of the Church also describe a type of benefit of Memorial services that applies to those who have departed from the present life in repentance or at least with a sacred desire for repentance, but who may not have had the opportunity to complete it. St. John Chrysostom said that prayers for the dead offer them “a certain consolation”. St Cyril of Jerusalem writes about a “very great benefit” that is derived by the souls for whom petition is made during the Divine Liturgy when the “most awesome sacrifice” is offered. P. N. Trembelas in his “Dogmatics” says that it has not been revealed to us “to what extent” and “to what degree” our prayers for the dead provide benefit and consolation.

Praying for the dead was certainly practiced by the early Church. Writings from the first few centuries testify to this. St John Chrysostom and St John of Damascus have told us that the practice of praying for the dead was established by the Apostles. That petitions for the repose and salvation of the deceased were included in daily worship. This is evident from the writings of Tertullian (200A.D.), St. Cyprian, bishop of Carthage (250 A.D.), the Apostolic Constitutions (4th century), etc. Even in Old Testament times praying for the dead occurred. In 2 Maccabees 12:40-45, which is part of the Orthodox Old Testament, we read about some that prayed for the dead, and we are told that “if he had not hoped that those that were slain should rise again, it would have seemed superfluous and vain to pray for the dead”, and that it is “a holy and wholesome thought to pray for the dead, that they may be loosed from sins.”

Exactly to what extent our prayers for our departed loved ones bring any benefit to them we do not know, we leave this to the mercy of God. But one thing we are certain: such prayers do benefit those who pray for the departed. They remind us that we too are going to die, they make us more diligent and cautious in getting ready for that ultimate journey. They help us realise that so much that we tend to focus on is futile. The only thing that really matters is getting to Heaven and being with God. St Anthony said, “If you want to be prepared for death, live every day of your life as if it’s the last one!”

Nikolaos Vassiliadis. The Mystery of Death. Brotherhood of Theologians, “The Savior”, Athens 1993

The funeral service, although not considered as specifically sacramental, is a special liturgical rite. The Church has special prayers for those who have “fallen asleep in the Lord”. When a person dies, the Church serves a special vigil over the lifeless body, called traditionally the Parastasis or Panikhida, both of which mean a “watch” or an “all-night vigil”.

The funeral vigil has the basic form of Matins. It begins with the normal Trisagion Prayers and the chanting of Psalm 91, followed by the special Great Litany for the dead. Alleluia replaces God is the Lord, as in Great Lent, and leads into the singing of the funeral Troparion. The Troparion and the Kontakion of the dead, as all hymns of the funeral vigil, meditate on the tragedy of death and the mercy of God, and petition eternal life for the person who is fallen asleep.

Troparion
Our only Creator Who with wisdom profound mercifully orders all things, and gives all that which is useful, give rest, O Lord, to the soul of Your servant who has fallen asleep, for he has placed his trust in Thee, our Maker and Fashioner and our God.

Kontakion
With the saints give rest, O Christ, to the soul of Your servant where sickness and sorrow are no more, neither sighing, but life everlasting.

It is the psalm which sings of the victory of righteousness and life over wickedness and death.

This psalm together with the verses and prayers that go with it, the canon hymns of the service, and the special funeral songs of St John of Damascus all are a meditation on life and death. They are, in the context of the new life of the Risen Christ who reigns in the Church, a lesson of serious instruction for those who are immune to the full tragedy of sin and its “wages”, which are death.

Sometimes men criticise the funeral vigil for its supposed morbidity and gloom; they say that there should be more words of resurrection and life. Yet the vigil itself is not the Church’s “final word” about death. It is simply the solemn contemplation upon death’s tragic character, its horrid reality and its power as that of sin and alienation from God. The realisation of these facts, which particularly in the modern age is so strikingly absent, is the absolute condition for the full appreciation and celebration of the victorious resurrection of Christ and his gracious gift of eternal life to mankind. Without such a preparatory meditation on death, it is doubtful whether the Christian Gospel of Life can be understandable at all.

Thus it is not at all ironic that the same St John of Damascus who wrote the joyful canon sung by the Church on the night of Pascha (Easter) is also the author of the Church’s songs of death, which are indeed unyielding in their gravity and uncompromising in their bluntness and realism about the inevitable fact of the final fate of fallen human existence.

What earthly sweetness remains unmixed with grief? What glory stands immutable on the earth? All things are but feeble shadows, all things are most deluding dreams, yet one moment only, and death shall supplant them all. But in the light of Your countenance, O Christ, and in the sweetness of Your beauty, give rest to him whom You have chosen, for as much as You love mankind.

I weep and lament when I think upon death, and behold our beauty created in the likeness of God lying in the tomb disfigured, bereft of glory and form. O the marvel of it! What is this mystery concerning us? Why have we been delivered to corruption? Why have we been wedded unto death? Truly, as it is written, by the command of God Who gives the departed rest (Funeral Hymns).

As the funeral service is now normally served, the Beatitudes are chanted after the canon and the hymns of St John, with prayer verses inserted between them on behalf of the dead. The Epistle reading is from First Thessalonians (4:13-17). The gospel reading is from St John (5:24-30). A sermon is preached and the people are dismissed after giving their “final kiss” with the singing of the final funeral song: Eternal Memory.

It has to be noted here that this song, contrary to the common understanding of it, is the supplication that God would remember the dead, for in the Bible it is God’s “eternal memory” which keeps man alive. Sheol or Hades or the Pit, the biblical realm of the dead also called Abaddon, is the condition of being forsaken and forgotten by God. It is the situation of non-life since in such a condition no one can praise the Lord; and the praise of the Lord is the only content and purpose of man’s life; it is the very reason for his existence. Thus, this most famous and final of the Orthodox funeral hymns is the prayer that the departed be eternally alive in the “eternal rest” of the “eternal memory” of God; all of which is made possible and actual by the resurrection of Jesus Christ which is the destruction of the Pit of Death by the splendour of Divine Righteousness and Life (see Ps 88; Hos 13:14; 1 Cori 15; Eph 4:9; Phil 2:5-11; 1 Peter 3).

The vigil of the dead should normally be fulfilled in the Eucharistic Liturgy in which the faithful meet the Risen Lord, and all those who are alive in him, in the glory of his Kingdom of Life. The fact that the funeral vigil, in recent years, has lost its preparatory character and has simply been transformed into the funeral service itself, separated from the Eucharistic Liturgy, is a sad fact which allows neither for the proper appreciation of the vigil itself nor for the full Christian vision of the meaning of life, death and resurrection in Christ, the Church and the Kingdom of God.

The fact that the divine liturgy, when it is preserved with the funeral vigil, is served before it and is made into something mournful, converted into a “requiem mass” offered “on behalf of the dead”, is also an innovation of recent centuries under old Roman Catholic influence which further distorts the Christian understanding and experience of death in Christ.

The Memorial Services are held as an act of love and remembrance towards the departed members of the Church. They are not, however, held on the following days:

From the Saturday of Lazarus until the Sunday of Saint Thomas.

On the feast days of our Lord: