Historic visit of the Archbishop of Australia to the Parish of St. John the Forerunner and Baptist in Jervis Bay, NSW

Jervis Bay, New South Wales, a location on the east coast of Australia which hosts a small but dynamic cell of Greeks, had the pleasure of receiving, for the first time since his arrival on the fifth continent, His Eminence Archbishop Makarios of Australia. This historic visit took place on Saturday, 7 January 2023, the feast day of the Patron Saint of the local Greek Orthodox community, Saint John the Forerunner and Baptist.

His Eminence liturgised on the feast of the Synaxis of Saint John the Baptist and Forerunner in the celebrating Holy Church, joined also by His Grace Bishop Bartholomew of Charioupolis and other clergy of the Holy Archdiocese of Australia. After the Dismissal of the Divine Liturgy, a meal was served in His Eminences’ honour, accompanied by a program of live music and traditional Greek dances.

In an atmosphere of great emotion, the Greeks of Jervis Bay warmly welcomed their Shepherd and expressed their gratitude for the paternal care and great love he has shown them. Representing the Parish of Saint John, Mr. Georgios Kapsis and Mr. Vasilios Valanidas offered warm speeches, thanking the Archbishop for the creation of the Archdiocesan Districts and emphasising their kind cooperation with the Archiepiscopal Vicar of Canberra, His Grace Bishop Bartholomew of Charioupolis.

They further emphasised that although there are only a few Greek families living in Jervis Bay, nevertheless “we love our faith, our Greece and our Archdiocese, and we do everything we can to help the work of the Archdiocese”. They also referred to the history of the construction of the Holy Church, dedicated to Saint John the Forerunner and Baptist, which was founded in 1990 and first opened in 1992, with the blessing of the late Archbishop Stylianos of Australia.  “We are not rich and many, but we are zealous”, they pointed out, among other things, while finally thanking their Shepherd again for what he has offered to the Parish in the last three years, in difficult circumstances, and wished him health and strength for the new year, with the request that he would soon visit their community again.

His Eminence Archbishop Makarios of Australia replied to their address just as heartily, visibly moved by the enthusiastic welcome given to him by the members of the Parish of Saint John, as well as by their devotion to the values and traditions of the homeland and the Orthodox faith. In introduction, His Eminence mentioned the ever-remembered Ecumenical Patriarch Athenagoras, who used to say: “We are few and innumerable”, referring to the Greeks of Constantinople. This phrase also fits the Parish of Jervis Bay, he appreciated, congratulating and thanking everyone for what they have done for their Greek Orthodox community and the local Church.

In addition, the Archbishop described his vision for the Parish of Saint John, focusing on three immediate goals: The first, that the consecration of the Holy Church should take place soon, in order to honour the memory of those who pioneered its construction. The second, to ordain a new clergyman from the area, who will be assigned to St. John’s Parish and will consistently serve the needs of the Jervis Bay faithful.

“It is not necessary for the person to be a theologian and learned, but above all to have faith”, he emphasised, expressing the certainty that the appointment of a Priest in the Parish will mark the beginning of an era of prosperity and further progress. The third goal is to make use of the Parish hall by organising events, and to this end he shared some of his thoughts with His Grace Bishop Bartholomew of Charioupolis.

Finally, His Eminence Archbishop Makarios declared himself optimistic about the future perspective of the Parish, while addressing a paternal request to its members, to maintain mutual love and unity, as well as their devotion to the Holy Archdiocese of Australia. 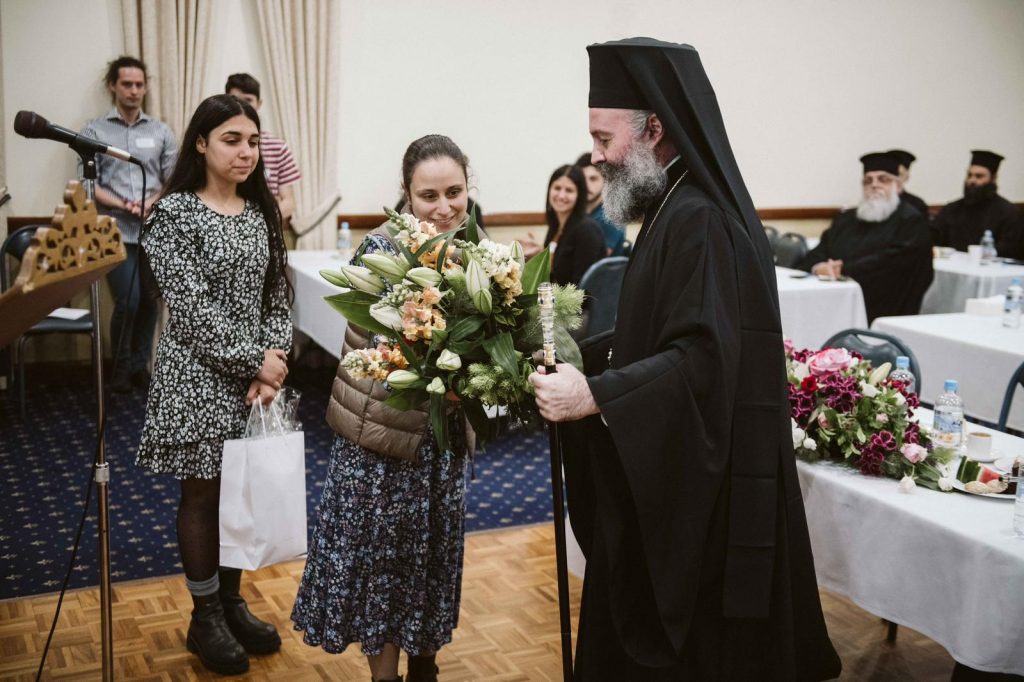 On Saturday, November 26, His Eminence Archbishop Makarios of Australia, who is on a pastoral tour in Adelaide, participated as a