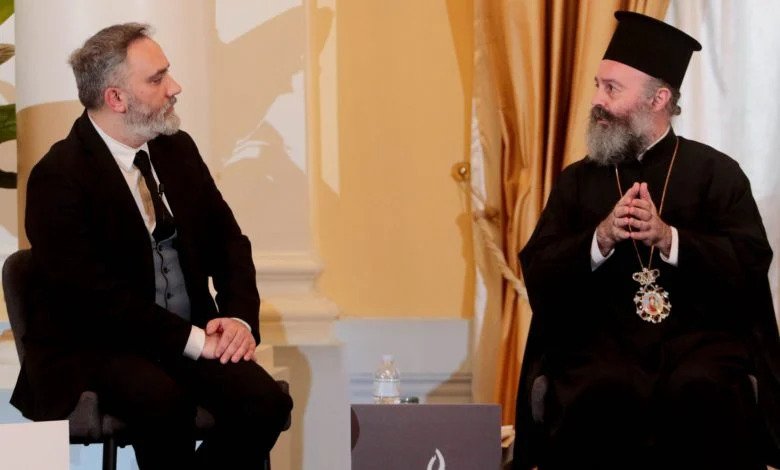 Archbishop Makarios of Australia: “Moscow has created a parallel Orthodox world, unrelated to the real one”

His Eminence Archbishop Makarios of Australia took part in a particularly interesting discussion, with the participation of distinguished speakers in which the subject of the Autocephalous regime of the Ukrainian Church and Russian war against Ukraine was discussed.

The discussion was held as part of the Round Table Evening entitled “Ukraine – Autocephaly and the war that changed the world”, which was organised on Tuesday, 24 January 2023, in Athens, by the Organisation for the Promotion of Greek and Orthodox Culture “AENAOS”.

During the Evening event, where the religious, theological, political and geopolitical implications of the above issue were discussed, whilst videotaped addresses of His All-Holiness Ecumenical Patriarch Bartholomew and His Beatitude Pope and Patriarch Theodoros II of Alexandria and All Africa were also played.

His Eminence Archbishop Makarios, who was one of the keynote speakers at the First Round Table, emphasised in his address that “what is happening today are the consequences of an ill ecclesiological situation, which is not current”. “From 1433 until today, the Russians have tried to surround every illegality they commit and every Babylonian dream of expansion they have with spirituality and supposed canonicity. When in 1448 they seceded from the Patriarchate, electing from the local Synod the Metropolitan of Kyiv, they claimed that they did so because Isidore, who had been elected by Constantinople, was a unionist; He participated in the Council of Ferrara-Florence. This was just an easy excuse to cover their canonical misconduct. Because in 1433, and of course before the election of Isidore, they had elected Jonah as Metropolitan of Kiev, again schismatically and fragmentedly, without asking the Ecumenical Patriarchate”, he underlined.

“Now the Moscow Church,” His Eminence continued, “is blessing an expansive war, which is theologically and canonically impermissible. But they have found the justification again. They go into Ukraine to de-demonise it. They create war in order to drive out the devil and all the evil that comes from the West. And unfortunately, Patriarch Kirill in his sermons distorts both the Gospel and Orthodox Theology. He presented the example of God, who gave his Son to the world to be sacrificed. And addressing the Russians, he called on them to sacrifice themselves in the war against Ukraine. He promised them paradise and sainthood if they martyr for their homeland. Here, as you understand, we are talking about ecclesiastical perversion. The Church of Russia behaves like an ecclesiastical underworld. They try to enshrine everything spiritually and theologically, but this cannot be achieved.”

Furthermore, the Archbishop of Australia discerned that the current events in the territory of Ukraine are not the consequences of the granting of the Autocephaly by the Ecumenical Patriarchate, but the consequences of an ill thought, which should concern us. “Our Russian brethren live at the level of a parallel ecclesiastical reality. And what they have been doing for years, is having created a parallel Orthodoxy. You all should know that they will never keep up with the rest of the Orthodox world. Their plan is to dominate, with all that entails. I am a little disappointed on a personal level that some Churches are not responding. They tolerate the new theology of war, they tolerate the expansionist policy of Moscow and above all they accept the ecclesiastical distortion that is being created. Don’t the Churches see what is happening in ecclesiastical becoming? Moscow is trying to create a parallel Orthodox world, which has nothing to do with the real Orthodox world. And we tolerate all this and bless it with our silence”, he concluded. On Friday, 30 September 2022, His Eminence Archbishop Makarios of Australia arrived in Perth, Western Australia, in order to conduct the